Based on the experience of some of our customers (we are using GoDaddy for hosting our client’s accounts) the tech support of the company was not available and instead the a voice message was stating the awareness of issues involving several services, including web hosting and emails.

The credit for that action was taken by AnonymousOwn3r who posted “Anonymous is an ideia I’m security leader of Anonymous because I’m behind many things such like irc, ops, attacks, and many”. Apparently the same person took responsibility for taking down other bigger players such Facebook and FBI sites earlier this year.

It would be nice to see what the agenda of the security/hacking Pro is and why the US based companies are being targeted.

The name of the action chosen by AnonymousOwn3r is TANGO DOWN. According to the Urban Dictionary the word TANGO DOWN  is used to describe a terorist that has been eleminated. It is mainly used by the Special Forces to describe an eleminated enemy during a firefight.

As the topic of the article when I started it was related to SEO, I need to say a few words about the effect of that action to the search engine ranking of the websites which had been down today and there were many websites down today.

The fact that the website were down even a half of the day should not affect the ranking in theory. However if the outage happened during the search engine crawling phase then it may potentially  give a wrong signal to the search engine. This may be considered as the website’s unavailability sign which in return may lead to the ranking downgrade. Hopefully Google, Yahoo, Bing as well as other search engines will not penalize website even insignificantly for actions taken by AnonymousOwn3r.

GoDaddy just posted a message on their site “At 10:25 am PT, GoDaddy.com and associated customer services experienced intermittent outages. Services began to be restored for the bulk of affected customers at 2:43 pm PT. At no time was any sensitive customer information, such as credit card data, passwords or names and addresses, compromised.We will provide an additional update within the next 24 hours. We want to thank our customers for their patience and support.” and finally the temp page was replaced by a GoDaddy fully functional website.

Thank you GoDaddy for taking care of the issue relatively quickly! Will Godaddy disclose the nature of the problems?

I hope all precautions will be taken in the future to avoid similar outages of other US based institutions.

Continue [9/11/12] I just saw the GoDaddy statement regarding to the yesterday outage according to which it had nothing to do with the DDoS (See below). 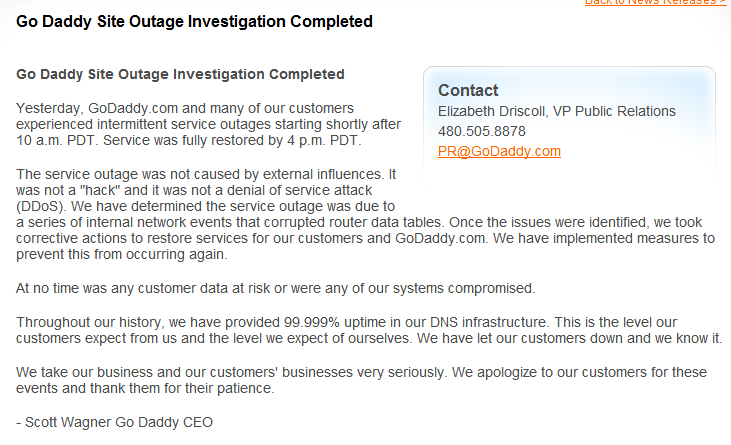 Was DDoS actually a reason GoDaddy was down yesterday for about 6 hours or perhaps AnonymousOwn3r just is taking a credit for what AnonymousOwn3r has nothing to do with?

This is a twit posted byAnonymousOwn3r: Go daddy souce code and database leaked by  by @AnonymousOwn3r pastebin.com/WMb4Qg7H

Wondering if anybody knows the idea behind these AnonymousOwn3r’s actions.