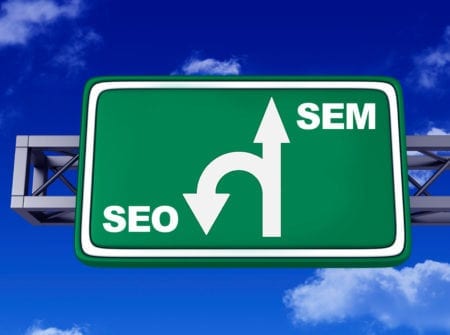 SEO (Serch engine optimization) has been something of a popular topic when it comes to technological talks, and the reason this is so is because of the features and efficiency that come alongside the use of search engines. No matter what you’re in need of on the internet a search engine is going to make things much easier, whether you’re looking to find a great new restaurant or simply somewhere new to shop. SEO is always looked at as being a “best of the best” type game, which is where the person who makes prevalent use of technical SEO tactics and relevant content wins in the end. Although SEO is an acronym that many people have grown to know SEM seems like it’s making its way to the top, and we’re going to go through why this is happening. SEO has innovated in ways we never would have thought possible, back in the day when the term “SEO” came up you would just think of keywords in metatags and such. Google took it upon themselves to improve their algorithm, and as a result the SEO game was turned into an ever-changing cornucopia of frustration.

We suppose that’s how it’s supposed to be in the end, because everything that’s worth fighting for never comes easy. Google has dedicated themselves to ranking the best sites in the best positions, this means that high-quality and engaging content reigns king these days. Growing organically isn’t impossible, but it’s definitely one of the harder things you can try to accomplish online. SEM is a different term, but it’s essentially the same thing in the end. Search Engine Marketing is a term that represents the marketing portion of SEO, and it’s pretty much the new term that’s being coined for the time being. Innovation is pretty much inevitable these days, and that goes for just about everything (including search engine optimization).

Seeing as the whole algorithm thing has been throwing people off of their game there has been rumours spreading that state SEO is “dying”, but this is far from the truth. The fact of the matter is that SEO is going to stick around for a long, long time, it’s just going to be referred to as SEM sooner rather than later. Nobody is trying to rank their sites for the pure fun of it, and in the end it’s marketing no matter which angle you choose to work with. It’s an incredibly large industry, and when you’re working within such a large industry people are going to try and develop things that will help them stand out. This is why the entire process is so intriguing, as well as why it has so many incredible developments in such a short timeframe. This is the era of technology and there’s no way to get past that without talking about SEO, thinking otherwise would just be a quick way to push yourself towards the rule “out with the old and in with the new” you’re going to be blessed with more than one positive trait (no matter what the project at hand happens to be).

Don’t leave yourself uninformed of the events transpiring today, keeping yourself in the loop is crucial if you want to stay relevant in the SEM world. Marketers are coming to fruition just about every single day of the week, and it’s up to you to determine where you’ll sit on the online marketing patriarchy. You might not think the term SEM is that important right now, but give it a bit of time and you’ll see the error of your ways.