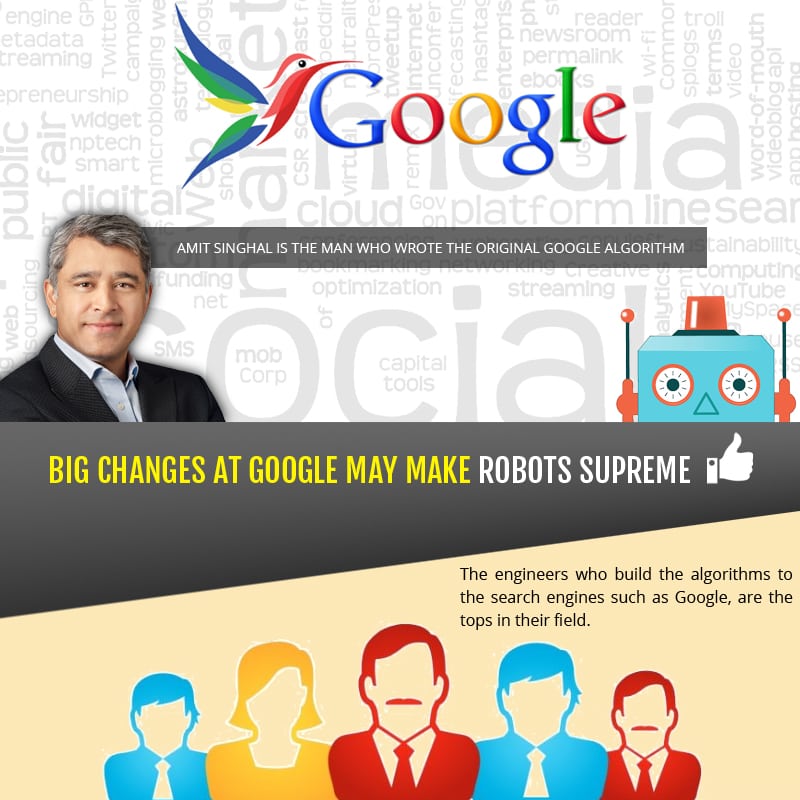 The engineers who build the algorithms to the search engines such as Google, are the tops in their field. They’re the cream of the crop who are the driving force behind what makes a search engine tick, and what webmasters and marketers come to respect and study.

The big news regarding these engineers and top experts is that Google’s top search engine chief, Amit Singhal is leaving his position after 15 years.

Singhal is the man who wrote the original Google algorithm that has led the company to dominance throughout the world. His skill and genius has kept marketers and hackers and webmasters at bay for well over a decade. Trying to decipher the algorithm has been the task of these people in order to gain a better advantage. The algorithm lasted quite a long time until Singhal pulled off his next major feat, the development of the Hummingbird algorithm that was the advanced form of the algorithm that has powered Google to new heights.

The original algorithm was primitive in comparison to Hummingbird. Hummingbird allowed for better understanding of the search engine of human search queries thus making for a better and rewarding surfing experience.

Singhal’s smarts didn’t end there. Following the success of Hummingbird comes the most advanced artificial intelligence search system ever, RankBrain. The world’s SEO experts are racking their brains trying to figure out RankBrain but it’s so advanced no one can make heads or tails out of it.

This begs the question of what will happen to the search engine industry if the artificial intelligence will start writing the algorithms thus making the need for human interaction obsolete. This has been the fear of many an industry, whether men will lose their jobs to robots and computers. It’s easy to see this having happened continuously over the past 50 years alone. Robots, computers, have replaced many people in manufacturing. Revolutionizing the manufacturing process and saving billions in overhead at the expense of the workers. The same can be said in today’s service industry with more and more computer systems taking over for people including support systems where computers and software answer questions by text or audio. The public can sometimes tell if the person on the other end of the phone or chat message are alive or simulated. This process follows the cost cutting, yet frustrating practice of American companies hiring foreigners to do the support. Now they don’t even need the foreigners.

Will search engines do the same?
That’s the big question and it all depends on the skills of the computing engineers and what they’re capable of or willing to do. Has Singhal left because his own genius put him out of a job? No one knows. He’s of such value that other companies will be chomping at the bit to have him on their team. The issue here is has the artificial intelligence developed now eclipsed the smarts of its creators?

Well this is science fact, and only inevitable in scope and design. Artificial intelligence is developing at astronomical levels in various systems in computing. The goal is to get a computing processing system that can think and react as would a smart animal or an adult human. That may seem far fetched, but today’s achievements show that it isn’t beyond the realm of human ingenuity.
What does this have to say about the future of search engines?
Well, what it means is that soon, search engines like Google will be so adept at interpreting what a surfer is searching for that it might be able to send pertinent results before a surfer even posts a query string. The ability to scan a surfer’s metrics across numerous platforms like we see in advertising, could make the need to search so effortless as to boggle the mind.

Needless to say, SEO experts all over the world will have their hands full awaiting the next advances that may well surprise us all.