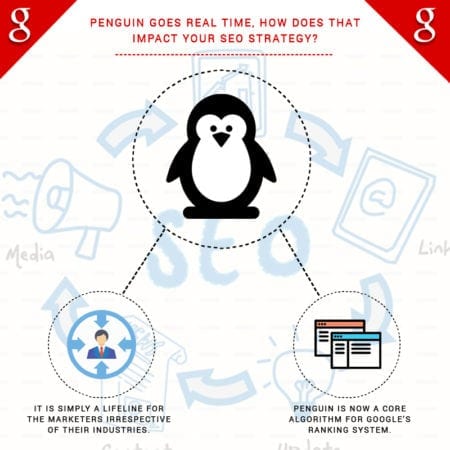 Not everybody would have loved the Penguin updates and it was something that had brought a major change in Google’s ranking algorithms. Since 2012, the algorithm has played a major role in shaping the optimization strategies for the SEO gurus. However, with Penguin updates marking an end and becoming real time, there can be greater implications to the SEO strategy that you might have been following.

It was in the year 2012 when Google rolled out this update with a clear cut goal of enhancing the user experience. A lot more emphasis was given on quality of content and the benefits that websites were offering to its readers. Eventually, the update with time made the SEO strategists follow white hat strategies and end up creating content that was amazing as well as compelling in nature.

The overall approach for the marketers changed drastically as the focus was now on creating appealing websites for the users instead of the only objective to create a high ranking website. Basically, the idea here was to target and curb the increased number of websites that were made using black hat SEO techniques. The other areas which it addressed were keyword stuffing and other unethical link building measures. On one hand, keyword stuffing meant users were unnecessarily plugging in as many keywords they could in an attempt to elevate their rankings. Link building practices, on the other hand, was majorly done by buying low-quality links in bulks and helping the website attain better rankings.

However, with Penguin being introduced and a number of follow-up updates being attached, it has always been a separate algorithm for main search engine ranking. However, with the recent minor changes released in the month of September this year, there has been a major announcement coming from Google. It states that going forward Penguin will be integrated into Google’s everyday processes for evaluating the ranking mechanism for millions of websites from across the world. It means Penguin is now a core algorithm for Google’s ranking system.

Although it might not sound to be a major change, but the eventual consequences might definitely make you feel so. The core algorithm of Google refreshes on a continuous basis and offers real-time analytics to the search engines. It is further used to develop the rankings. While on the other hand Penguin largely relied on offering infrequent refreshes for updating the results. It’s almost 700 days since the last major update.

Coming to the larger point, you might be wondering what grave impacts this new change could bring to your website. Yes, this calls for evaluating your SEO strategies and making it align with the continuous Penguin changes.

How does it impact your website and what to do to remain safe?

With real-time updates, the possibility of leveraging from any black-hat link building strategy or keyword stuffing will get a direct hit. This means, if your strategy includes any unethical strategy among the two mentioned above, there can be immediate impacts of the rankings. It would no longer mean that your rankings are affected only after the next Penguin update.

For many, SEO is regarded as a manipulation strategy as the end goal is to improve the rankings on search results. As per the recent Penguin 4.0 updates, there is a clear indication that there needs to be an end to philosophical approaches. It means with depletion of the manipulative practices having any relevance, the SEO industry will set to move towards a legitimate marketing business. With improved practices, there will be improved reputation.

To remain protected and ensure that you are doing well over the search engines, the 1st and foremost thing to do would be not to underestimate the power of Penguin. It is simply a lifeline for the marketers irrespective of their industries. With instant recovery from past penalties, especially for brands banking highly on their digital exposure, the new changes can be a life saver.

Another benefit of this change would mean that the punishment would be far more specific in nature. It means if any of the pages on your website experiences low-quality links, the rankings for that page, in particular, would only be affected. Once you fix the page, the rankings will improve while having no impact on the overall SEO of the website. It, in turn, protects the websites from any form of malicious SEO tactics or even from their own mistakes.