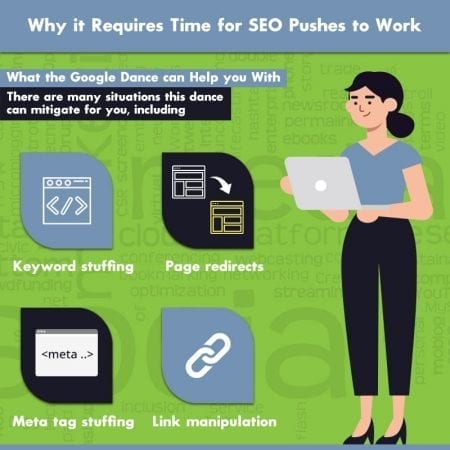 Many people have grown weary of their websites languishing on Google and so they’ve chosen to spend a large part of their advertising budget on high rated SEO consultants. Usually these consultants will recommend massively overhauling your website. There are lots of times when this simply backfires and the website slips even further in rankings. When this happens website owners find themselves wondering, “What happened?”

In 2003 many SEO started noticing that Google was cracking down on “black hat” tactics (e.g. underhanded ways that some people use to get higher in the SERPs). Then in 2012 the “Ranking Documents” patent was filed. This means that Google places your website in a random transitional ranking pattern for 70 days when they notice new ranking signals. Obviously, this is frustrating, but it’s also a good thing because it prevents black hatters from fooling Google while giving legitimate websites a fighting chance at a good ranking because they’ve done things correctly.

What the Google Dance can Help you With

There are many situations this dance can mitigate for you, including:

What Happens When Google Takes the Lead

Unfortunately, the Google dance is often seen as a type of penalty box that your website is place in until they make sure your new ranking signals are legitimate. What’s particularly frustrating is that this can last up to 70 days. However, instead of getting frustrated you should think of this as an audition whereby Google sees how you respond and then will typically rank you ever better than before unless you do something “stupid” (e.g. reverse course, ramp up poor SEO) during this time. When this happens, your website will be flagged and possibly penalized which will then result in a lower ranking. This is why it’s so important for you not to panic during this 70-day time period.

What you can do About the Google Dance

Sometimes you may want to do something about the Google dance, especially if you think someone took a shortcut or you’ve hired an unreliable professional. This should start with a conversation in which you discover what they’ve done so you can decide how to mitigate the situation. If you find they’ve taken a shortcut, you should stop and re-evaluate what you’re doing. It may even be time to consider outsourcing your SEO to someone you know for certain is a reputable specialist. Regardless, anyone who’s taken a shortcut should (at the very least) have their website privileges revoked.

When you’re certain that you’ve used a reputable professional, who’s created successful campaigns in the past, don’t panic. Instead, trust the process and wait the 70-days out. Ultimately, high-quality work will win out in usually about 60 – 65 days. Of course, you should be prepared for the impending roller coaster ride in the meantime but in the end, it’ll be worth the wait.

When you need your website’s marketing handled properly the first time, there’s one name that you should call on: Affordable SEO FL. Having been around for several years now, they’ve been able to help numerous customers who are very satisfied with their work. Instead of dancing and fooling around with things yourself or hiring someone who doesn’t know what they’re doing to mess with things for you, make sure you reach out to them today. Ultimately, you’ll be glad you did.