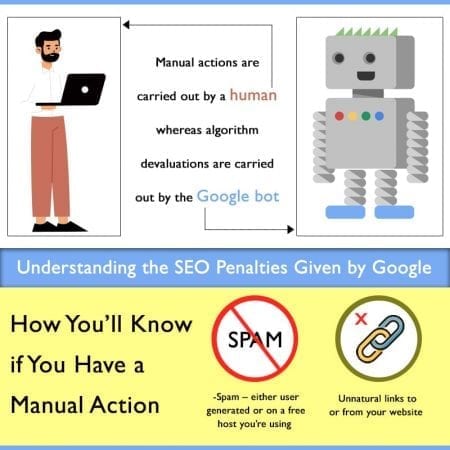 Have you ever wondered what a SEO penalty from Google is? Unfortunately, the term “penalty” is loosely used today. Many say that any downturn in traffic or visibility is a “penalty” regardless of why or how it happened, but this isn’t accurate. This term has a distinct, definitive meaning though.

The only “true” or “official” penalty happens when Google takes a “manual action.” This happens when a human from Google looks at your website and moves you down the SERPs because you’ve violated their Webmaster Quality Guidelines somehow (e.g. attempting to manipulate Google’s search index). It’s different from an “algorithmic devaluation” that happens when your website loses ranking because Google has rolled out a general algorithmic update.

How a Manual Action and Algorithmic Devaluation are Different

There are many ways in which these are different, including:

How You’ll Know if You Have a Manual Action

Some of the times when Google may choose to apply manual actions include:

Google’s search console has a drop down for each item so you’ll know how to fix it. Unfortunately, this can sometimes be quite complicated. However, once you identify and fix the issue you can re-submit your website for what’s known as a “reconsideration request.” Essentially this is you asking Google to remove the SEO penalty they’ve manually applied to your website.

Algorithms aren’t a type of SEO penalty although they can devalue your website, decrease its traffic, and bring you down in the SERPs. These things may occur when you haven’t met Google Webmaster Guidelines’ best practices. However, when your algorithm is strong enough it’ll increase your website’s value so you’re more visible in the search engine and thus receive more traffic. In this way your algorithm can be thought of as a type of penalty since your website is negatively affected.

Unfortunately, SEO professionals will probably never stop using the term “SEO penalty.” After all, it’s much easier for them to tell their clients that they’ve lost visibility and traffic than to try to explain an “algorithmic devaluation” even if that’s what’s truly happened. Nevertheless, it’s still important for you to understand what’s happening so that you know what the appropriate actions are to take – if there are any at all that you can take. For additional help with this matter you should contact the Affordable SEO Company. Over the years they’ve been able to help many clients avoid getting an SEO penalty and work their way up in the SERPs so that they received more traffic and visibility instead.