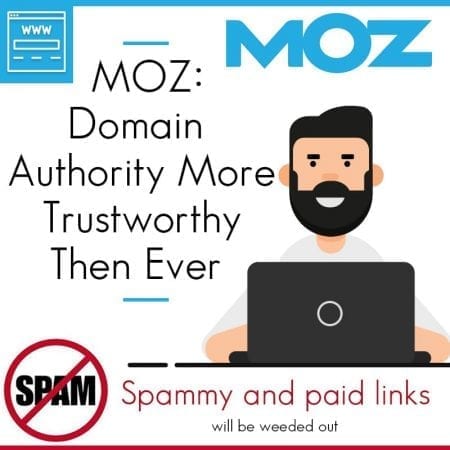 On March 5, MOZ will unleash a new upgrade that is very controversial to many.

MOZ, a leader in the SEO software, says this upgrade will provide a trustworthy measurement in how worthy a domain is. Spammy and paid links will be weeded out in order to see how well a domain will rank on Google or other search engines.

Google does not give the domain authority score, nor does it use it when ranking sites. Many in the SEO business feel that the score only causes confusion among those that are trying to rank.

MOZ states domain authority is a search engine ranking score developed by MOZ that predicts how well a website will rank on search engine result pages (SERPs). A Domain Authority score ranges from one to 100, with higher scores corresponding to a greater ability to rank.”

Russ Jones, Principal Search Scientist at MOZ, has offered to reason as to why quite a few changes were made when it comes to measuring domain authority, also known as MOZ DA. With this new system, it will be able to understand why certain sites did not rank well for keywords and reveal those factors that caused this. A new model will be in place for catching link manipulation, with MOZ being on a neutral network instead of a complicated linear model. A Spam score is also being added, along with a list of other factors. MOZ currently has an index of 35 trillion links.

Why exactly did MOZ make these changes? MOZ feels that with these changes to the domain authority, they will be able to remove spam enhance correlations and deliver a more trustworthy metric system.

People are taking both sides of the MOZ domain authority debate. When asked what they felt about DA, those against it stated they want accurate link numbers, and not some useless, made up numbers. Some are on the fence with it, stating that it is good for trust, and looks good for your clients. Others say that when coupled with other metrics, it is a useful service. However, they would not recommend using DA all on its own.

Russ Jones did fire back when a member of an SEO community stated that the Spam metric was very inaccurate and needed to be fixed. Jones said that most people think it is supposed to detect spam, but it does not and was never intended to be used that way. He also stated it was based on on-site metrics and not links. This member clapped back to Jones, who said the Spam Score was still misleading because his brand new site had a Spam Score of 7, then went up to 9. Jones then stated that the Spam Score was rewritten, and is now on a scale of 0-100, where it used to be on a scale of 0-14.

There are individuals that are in favor of using domain authority. One member of the same community said that DA is a helpful barometer for link purposes. Jones responded back that it will get better, and with the new DA, it will be able to help you pick out link sellers, buyers, and comment spammers. Jones then stated that he was super proud of it.

In summary, there are many things that people do not understand with domain authority and what the score really helps with. More and more people are starting to delve deep into the domain authority, losing sight of what is important in SEO. If you are confused about MOZ DA, feel free to contact AFF SEO for further assistance.