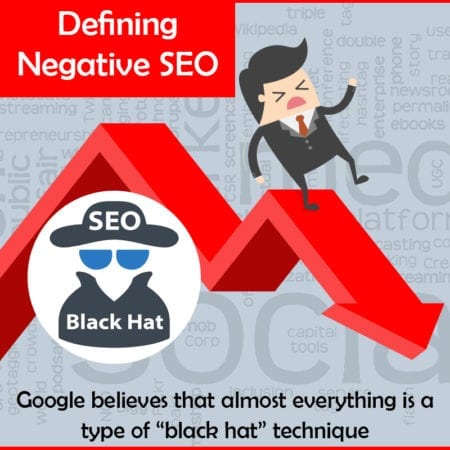 Everyone who owns a business knows that their online presence is significant. This relies heavily on SEO to get you to the top of the SERPs pages where people will start to take notice of who you are and what you offer.

One thing people don’t realize though is that SEO falls into two categories today. These include:

When it comes to negative SEO, there are some well-known techniques people use:

What Negative SEO is and is Not

The reason why it’s so important whether this is hacking is because it determines a person’s intent. Beyond this, there are a few other things you need to understand:

What Google Says About Negative SEO

According to Google, this isn’t real. Unfortunately, Google isn’t being completely honest here. It’s only logical that if you can accidentally hurt your rankings by shifting a variable, an external entity can do the same thing. Of course, Google does try to prevent certain tactics from causing too much damage, but they’re not perfect.

Regardless of what Google says, it’s important to realize that negative SEO is real, and it happens a lot – especially now that there are a lot of platforms like Amazon in existence. There’s intense competition within certain product categories and people are willing to do whatever it takes to rise to the top there.

Whether you want to believe Google or someone else here is up to you. However, there is one thing you can’t afford to ignore: how well your website is doing in the SERPs. To improve this you’ll want to employ Affordable SEO Company – a company with years of experience putting positive SEO to work and gaining great results for their clients.